The Sid team worked with the group weekly over three months, exploring ways of each dancer expressing themselves with power, grace and their own unique dance. Having dancers from SiD’s Contact Dance Company to act as role models and skilled animators was really important to the success of the project. 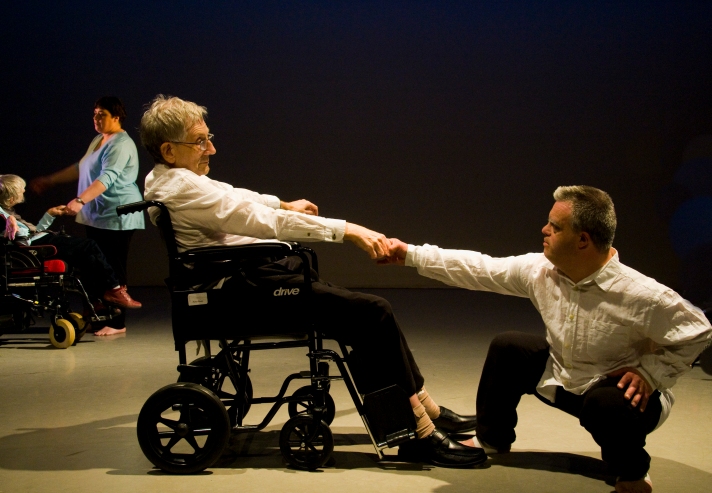 In the photo above we see Contact company members Mervyn and Erika (rhs of duets) performing with Jane and Peter from Cerebral Palsy Midlands.

After many weeks of exploring dance within quite a small studio at Cerebral Palsy Midlands the entire cast had a week rehearsing at Elmhurst School Theatre. The performers worked really hard with an incredible amount of focus to produce a great show. Heres is the view form one of the dancers parents from CPM

As I walked into the theatre, I honestly did not know what I was expecting from this performance, but as soon as the curtains went up I was hooked and so were the audience around me, by the end there was not a dry eye in the house.

It was amazing, emotional and educational!

As a mother I was in awe of my two daughters, for all the effort they have put in to the performance, Vicky has come of age, it was one of the first times I have looked at her as a grown woman and Sarah for supporting the people from Cerebral Palsy Midlands and even joining in the performance.

As Anthony Lunney said “I bet you wasn’t expecting that, was you?”I said “You all continue to totally amaze me”

I have never seen Vicky and the other performers so focussed, Gary Clifton so expressive or Peter Dunn being so cool.

Gary Clifton who is usually such a quiet man cried after and said “Did you really like it?”

“Yes Gary”,was the answer, “You were all totally amazing.”

A big giant Thankyou to all the people involved, I am in awe of how you all achieved to bring the performance together.

Everybody wants to know when they can do another project again.

As a trustee at CPMids, I felt proud as punch and would be willing in the future to look into what we need to do to continue to allow the people who come to our centre to express themselves with movement, music and dance.

View all posts by rayjsid