It was quite a day for Contact Dance, performing our first piece away from Shropshire, in the beautiful Quay Theatre at The Lowry, Salford.
Our new piece ‘Reach for the Sky’ involves twelve dancers, and we had all been invited by So Many Words Theatre Company to perform the piece as part of a showcase called ‘The Clouds Show Riches’.

Ten of us set off from Shropshire on Wednesday morning, on the Mencap Minibus (many thanks to Mencap), while dancers Rachel and Anna were still busy teaching at the Birmingham Dance Exchange.

We arrived and were impressed by all the beautiful architecture and water at Salford Quay; an exploratory stroll around the building eventually led us to the Quay Theatre.
After a fair bit of banging on random stage doors trying to get in, we eventually arrived on stage for our technical run through. But still no Rachel and Anna, who were driving as fast as they legally could, up the M6.
We marked through the piece, trying out lighting with the skilful and friendly technical crew.  Everyone was excited to be on stage; it was challenging performing the piece, which involved much legging it through a dark tunnel back stage to find our proper entrance points in the wings, and getting used to unexpected clouds of smoke as we tried out different lighting effects.

Another problem was that the stage was much larger then we were used to, so the whole piece was taking much longer and we were running out of music. But no panic….

The dancers dealt with these challenges brilliantly. Rachel and Anna arrived, hooray! One group was late so we had another chance to run the piece with the whole company, hooray again! And in the meantime we had re-edited the music to take into account the wider stage. In the way that things do, everything turned out fine.

After the technical rehearsal, we had an hour to mess about in Salford quay, most certainly not mess around on the escalators and find something to eat and get back to the venue. 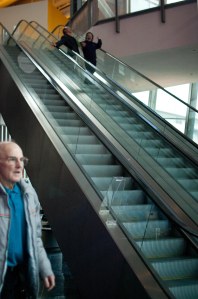 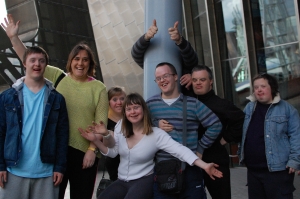 Contact dancers  watched the first half of the show, which included a brilliant performance by Dance Syndrome. There was much frantic changing during the interval, nervous warming up, the occasional emotional crisis and Rachel’s impromptu and comical Bollywood dances to put everyone at ease….

Eventually we took to the stage, everyone seemed to really enjoy performing. The dance went really well and the dancers found their focus, presence and energy. The crowd gave us huge applause, we bowed and left the stage.

After much chatter and hugs and no beer (sad face), we headed home back down the M6 or we would of it it hadn’t of been closed for repairs. I think it was about 2am before the last of us arrived back home. A long, exciting and truly worthwhile adventure. Many thanks to So Many Words Theatre Company, Mencap, and Disability Arts Shropshire for providing the funding that made it all possible.